Its been a difficult few weeks since I last posted, having transferred from one online accounts package to another and enduring all the associated stresses connected with such a task, such as downloading 3 years of reports and invoices and transferring over customers details…. Not fun, but necessary..

So when I had the opportunity to read an advance copy of a brand new Science fiction book, I jumped at the chance. 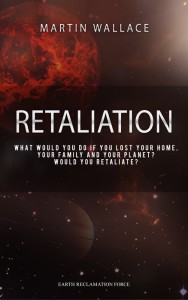 Sci-Fi is one of my favourite genres, so I took to Retaliation  by Martin Wallace with gusto.

We are introduced to the story by Scott Cave a Lt Commander in the Earth Reclamation Force.

Based in the present decade but where the human race has advanced much more than we actually have; being much more proficient in space travel and terra-forming, Retaliation  introduces us to a world in which we have faced a terrible adversary and billions of us haven’t survived.

Coming from outer space – The Feridians, a monstrous, war-mongering race, launch a scathing attack on the Earth, one which even with all the technological advances the human race in this book have achieved, cannot be stopped; Not without the ultimate weapon and here-in lies the first big Gasp moment for me…

Here it seems the author has tapped into everyones worst fears of the present time and quickly shows us what many of us fear will happen if the someone on Earth decides (for whatever reason) to launch Nuclear weapons.

Luckily some humans are aboard space cruisers and are sheltered from not only the insidious antagonists, but are also able to re-group and form the Earth Reclamation Force.

We then follow the story of Lt Commander Cave through the arduous and painful battle to reclaim our planet and indeed our humanity, finding out about him along the way. The family he lost the day of the first wave of the Feridians attack and just why he is such a “loose cannon” kinda guy…

There are also some great female characters (something I always like, being an avid fan of greats such as Alien & Terminator), and in Retaliation, we have some ladies of note, particularly Naomi Ward, who grew up very close to where LT Commander Cave did. She, although they never met prior to the events of the book, reminds him of home and keeps him grounded.

And then we have Selina Laverty, his superior and most definitely his “type” but with hierarchy being important to maintain control in this power-struggling world, this never actually takes shape; Then later in the book, there is Amy, a great character with depth, gusto and chutzpah.

We follow the momentous battles, finding and losing of survivors and worse still going toe-to-toe with the terrifying Feridians for the final battle for Earth, which (without spoiling the book) is well worth reading, if only for that swell of pride it gives…

It makes you believe that everyone really could come together to fight a common enemy, but would we ultimately win?

If you would like us to review your work, please email

Send this to a friend